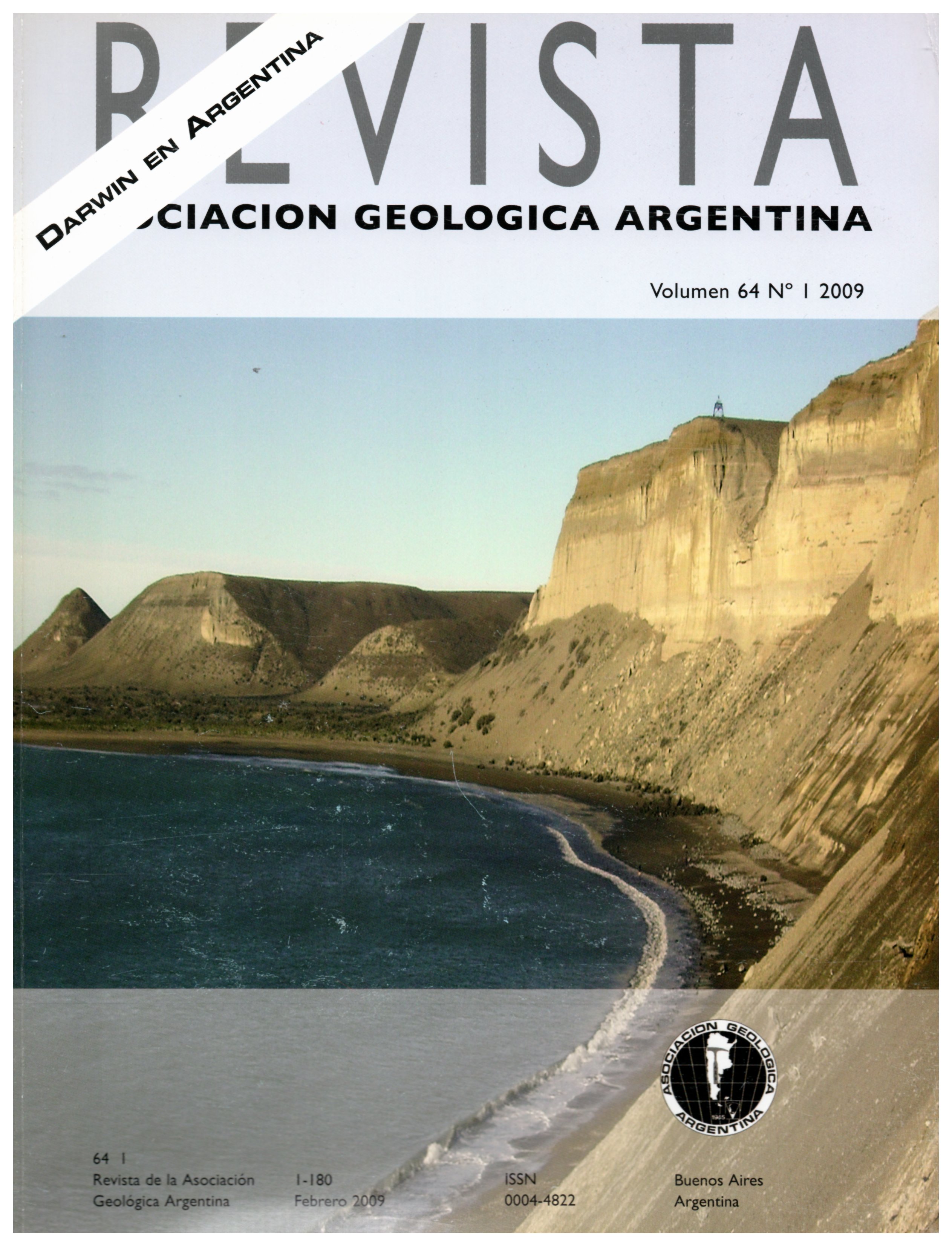 Portrait with signature gifted by Charles Darwin to the Academia Nacional de Ciencias in 1878 acknowledging his nomination as an Honorary
Member. Photograph taken by Julia Margaret Cameron in 1868. Unpublished original copy kept in the Academia (see Depetris this volume)

On the occasion of the 200th. anniversary of Charles Darwin´s birth, the Asociación Geológica Argentina decided to prepare a special issue devoted to the geological research undertaken by Darwin in Argentina. As it is well known, during his journeys on board HMS Beagle under the command of Captain Robert FitzRoy, he had the opportunity to survey overland different areas of South America. Darwin spent nearly three years - between August 1832 and April 1835 - visiting and studying different regions of our country, as illustrated in figure 1.

Figure 1: Journeys of HMS Beagle in southern South America (base map modified from Bowly 1990). Dates of Darwin's rides overland are shown in bold while the trips on board HMS Beagle are shown in italics, taken from Keynes (2001).

The aim of this special issue is to analyze his important geological observations and to emphasize the validity of many of his ideas under a 21st Century perspective. In order to accomplish this aim, several key localities that Darwin examined from a geological point of view during his voyage were selected. Such an analysis was carried out by several geologists and paleontologists well acquainted with the diverse problems that Darwin faced along his journeys in Argentina.
HMS Beagle's main mission was to survey the coasts of southern South America, which it carried out during several journeys along the coast. The time needed to chart the coast in details gave Darwin several opportunities to spend considerable time on land. During the survey he also had many occasions to land at selected points along the Atlantic coast.
The first of these fieldtrips was done between August and October 1832 and gave him the opportunity to visit Punta Alta near the fort of Bahía Blanca (Fig. 1). The second one was between November 1832 and May 1833 to visit the Beagle Channel, the surrounding areas of Tierra del Fuego Island, and the Malvinas Islands.
The third and more important fieldtrip was, after landing in Carmen de Patagones in August 1833 (Fig. 1), to ride across the Pampas to Buenos Aires city and later on to Santa Fé and Bajada (today Paraná city) on the Río Paraná. The fourth trip began in Montevideo in December 1833 and allowed Darwin to examine various points along the Patagonian coast such as Puerto Deseado and Puerto San Julián. Afterwards HMS Beagle sailed to Tierra del Fuego where it spent nearly four months until March 1834. Later on it visited again different areas of the Malvinas Islands. In April of 1834 it anchored in the mouth of Río Santa Cruz. It was during this trip that Darwin, FitzRoy and more than 20 crew members sailed upstream the Río Santa Cruz in three small whale boats, almost reaching its headwaters near the foothills of the Patagonian Andes.
This fourth trip continued across the Magallanes and strait of along the Pacific coast landing in Valparaíso in July 1834, and spending several months surveying the Chilean coast. Darwin's last visit to Argentina was between March and April 1835 (Fig. 1), when he crossed the Andes between Santiago and Mendoza following two different cordilleran passes. The different contributions of this issue were organized based on stratigraphic record and location (Fig. 2). The sections of the Andes are the first to be analyzed, then Patagonia and Tierra del Fuego, and finally the Cenozoic of the Pampas, ending with the origin of Puente del Inca and Darwin's tectonic ideas on the formation of the Andes.

Figure 2: Approximate location of the different contributions dealing with Darwin's geological research in Argentina indicated by an asterisk (compare with Figure 1).

WORKS CITED IN THE TEXT